Some Context for the Standing Rock Protests 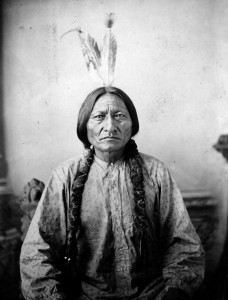 All it should take to feel solidarity with the Standing Rock protests is the vaguest knowledge of colonial misdeeds and a firm belief that, yes, the Thanksgiving story really is that messed up. (The knowledge that Trump himself has had as much as $1 million invested in the pipeline should also help.) Yet the fact that journalists and others haven’t done more to situate the fight within the larger context of Sioux history is baffling.

Why has nobody mentioned the fact that Crazy Horse, whose face is currently being carved, Mt. Rushmore-style, into one of the Black Hills, was a Lakota Sioux? Or that Custer’s Last Stand, that infamous battle of the American West, involved the Lakota Sioux? Or that Sitting Bull, the storied chief, was a Lakota Sioux who also died on the Standing Rock reservation? Now would be the time for these myths to embolden the present. And yet they’re still hardly more than the names of our kitschiest saloons.

And what about the parallels between the pipeline and the gold rush? There are many. It was largely the discovery of gold in California in 1849 that that spurred one of the biggest encroachments of non-natives into what was then a mostly unbound “Indian frontier.” Brutal fighting resulted. The short-lived solution was the Laramie Treaty of 1851, in which the Sioux (or the ones who knew about the treaty, anyway) agreed to live within specified tribal lands while allowing prospectors and others safe passage along designated roads. 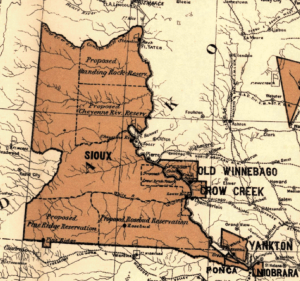 When more gold was found in the early 1860s, this time at the headwaters of the Missouri River, the trespassing commenced. The army enabled it by building forts to protect the seekers, yet the Civil War was expensive and so the soldiers, too, sought gold. Fighting broke out again and, in 1868, another Laramie Treaty was signed. It was more of the same: the Sioux were granted a reduced protected area—in this case, the Great Sioux Reservation, which included the present-day Standing Rock territory—in exchange for allowing the army and others safe passage along specific roads. The reservation began on the east side of the Missouri River and extended to the western borders of the Dakotas. It included the sacred burial grounds through which the Dakota Access Pipeline would run as well as a section of the river it might one day pollute. 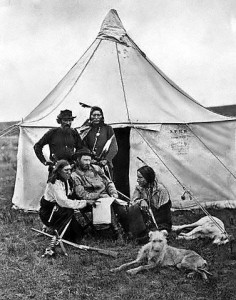 General Custer and scouts in the Black Hills, 1874

Gold was involved in yet another broken promise. In 1874, on orders from President Grant, General Custer led a brigade into the Black Hills—also Sioux territory—to find a new location for a fort. That much was legal (I think). What wasn’t was the fact that some on the expedition also sought gold. The Black Hills were considered sacred to the Sioux, and when the bluecoat miners found what they were looking for, Custer gushed to the press, never mentioning the fact that the treasure was on Sioux land. News spread, fortune seekers streamed into protected Sioux territory, and tensions rose again.

Eventually, political pressure mounted to protect the intruding gold hunters from Sioux attack, despite the fact that their presence was illegal. Yet the Sioux refused to sign a new treaty and scoffed at all financial offers for the land. Without a legal justification for seizing the hills, the government resorted to provoking the Sioux into starting a war, which they hoped would yield the desired bounty. It didn’t; General Custer was defeated soundly.

But no matter. The Laramie Treaty of 1868 had stated that no land could be ceded from the Sioux unless ¾ of tribal males agreed to it. Yet in 1877, Congress acted unilaterally to remove the Black Hills from their territory. Their land was reduced even further in 1899, when the boundaries of the present-day Standing Rock reservation were formed.

This barely scratches the surface, of course. And I should say that I hesitate to post something like this after only cursory research. Please scrutinze. The gist is that, at this point in the Standing Rock fight, we should have a far better grasp on exactly how, and how cynically, history is now being repeated.

Jalopy in the Brooklyn Rail

Christine Blasey Ford and the Train of History

Christine Blasey Ford and the Train of History

In “The Class Struggles in France,” Marx referred to revolutions…

Jalopy in the Brooklyn Rail

Type your search keyword, and press enter to search